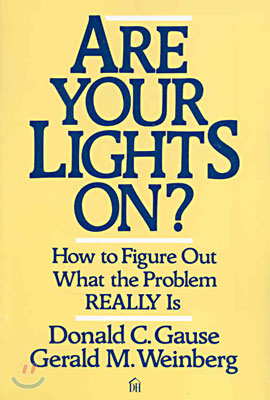 How to Figure Out What the Problem REALLY Is

<< I just blew up a few PARAGRAPHS by accidentally clicking the Google button on my Google toolbar! Desperately hoped the content would remain while pressing Alt-Left, but to my despair everything was gone. How come web applications do not restore the content or provide an auto-save? Well, maybe they do in some other applications. << I have been trying to read this book since quite a while ago, but never was much into 'execution'. Finally I managed to order this book with several other books at Amazon. It was only the second English book that I read completely (the first one was 'the elements of style') among 50 other books that I have read this year. This book is about problem solving. The authors are famous for their great insight in computer programming and problem solving. Rather than stating the 10 Commendments of problem solving, the authors took a long but more effective way. They tell a story in each section to end up with a sparkling insight. The book is very unique in the way of presenting the idea and insight - An illustration in every couple of pages, bold and capitalized texts all over to emphasize, a list of possible actions or solutions along with multiple choices, a brilliant sense of humor, etc. What they accomplished with such attempt is readers' attention and impact on their lessons to give. Let's have a look at some of these insights this book guides its readers to: Part 1. What is the problem?

‘A problem is a difference between things as desired and things as perceived.’

Part 2. What is the problem?

‘You can never be sure you have a correct definition, even after the problem is solved.’
‘But don’t ever stop trying to get one.’

Defining a problem is sometimes harder than solving it.

Part 3. What is the problem really?

Each solution is the source of the next problem.

I totally agree, especially in the field of computer programming where it’s all about side effects and ignoring/avoiding them.

The trickiest part of certain problems is just recognizing their existence.

If you can’t think of at least three things that might be wrong with your understanding of the problem,
you don’t understand the problem.

Once you have a problem statement in words, play with the words until the statement is in everyone’s head.

This is very similar to lateral thinking.

Part 4. Whose problem is it?

This part brings up this story of the tunnel. Since there is a warning stating ‘the tunnel ahead, lights on’, all drivers turn their lights on. But what happens is they often forget to turn them off, later to find the dead battery. So what shall the designers do? ‘Turn the lights off’ wouldn’t be wise because then the drivers would turn off at nights. (Common sense might lead them to leave the lights on, but anyway this doesn’t sound like a perfect solution.) How about ‘if daylight & lights on, turn it off. if night & lights on, leave it on. …’ Cars are surely going to crash with drivers reading this epic. The point of this situation is that the problem is not of the designer, but of the drivers. They don’t need all that much details. What not just ‘Are your lights on?’ It’s their problem. Let them solve by themselves.

Part 5. Where does it come from?

The problem actually comes from the problem solver 53.27% of the time.

(Don’t tell me you want the source of their 53.27% research figure)

Who sent this problem? What’s he trying to do to me?

Part 6. Do we really want to solve it?
Not all problems require solutions. There are time people don’t even know what they want, and other times they just want the problem unsolved and eke out.

‘The fish is always the last to see water.’